Running or cycling 100km through Ned Kelly Country in North East Victoria was an adventure on it own…getting attacked by Magpies or almost run over by a Kangaroos just made it more interesting.

Starting my 100km race at mid-night was tricky, as I had to try to get some sleep during the day, which was not easy. This race was special in many aspects and one was that each runner had to figure out her or his starting time with the aim to finish as close as possible to 12 lunch-time on Sunday. Initially I signed up for a 10pm start, changed to 11pm a few weeks later and settled for a mid-night start a couple of days prior the event, which was a great call, as I crossed the finish at 12:14 on Sunday morning – almost perfect and very happy with a new personal best for a 100km run.

Showing up at a quarter to mid-night I only found one other runner waiting, which was another unusual part about this race, no big crowds showing you off.

The organiser briefed us about a few tricky turns not to miss in the dark and off we went. We decided to stick together until we passed those tricky turns (it was actually so dark that I almost missed the first check-point as the food table was not marked nor manned).

After the first 7 km the route changed to full 18 km straight out and back into the dark. I soon left my running buddy behind and powered along, under a clear sky and the Southern Cross guiding me.

For a few hours it was me, myself and a 2m wide cycling path plus from times to times some funny noises in the bushes – possum, kangaroo, bogey man? Eventually the first of many small and faint lights started bobbing up and down in the distance and soon I started crossing path with runners who started early then me.

With temperature dropping into single digits, I was glad to wear gloves, two buffs and a wind jacket. First manned checkpoint at turning point of 25km and back it went for another 18km straight run.

At 5:30 in the morning I found myself at the start again and a few cyclist (trooper ) were already getting ready to start their chase.

I left my jacket and since it was still very cold (7 degrees) I decided to add another shirt under my running outfit – my bib had to be visible now for cyclist to identify the runners. 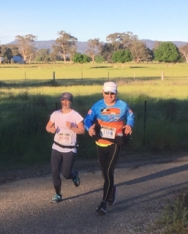 The first 10 km of second half of race offered some variation as we ran through a park along the Ovens River, before turning into suburbs of Wangaratta and once heading out of town it turned into another cycle path straight out and back towards the 75km turn around.

On my way back, around 78km, I had a direct encounter with the local wild life. I saw this magpie sitting on a traffic sign and assumed it was all happy there watching me running past – wrong! 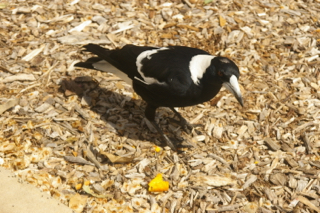 The moment I passed under the sign the attack started. Got dive-bombed 5 times from behind…one way to make me take up speed again, I guess.

Around the same time those faster runners (which started 2 or 3 hours behind me) showed up and over took me and of course those cyclist followed soon thereafter.

However it took quite a while before I crosses Francois on his tandem bike and I made a quick calculation. I had 15km to go (did about 8km an hour at that stage) and they had 20km to cycle to get back where I was when I crossed them. So my guess was they will catch me around the 90 – 95km mark.

With the sun raising higher and higher I started getting hotter and hotter and that second t’shirt became a nuisance now. Risk of over heating became a factor and probably the reason of me slowing down.

Once on my last 10km in the park section and with no sight of Francois yet I started to hope I may be in with a chance as it became hard for a tandem to drive fast and navigating those barriers when the cycling path crossed a main road. I just passed the 2km to finish sign when suddenly I heard the familiar voice of Francois – bugger, caught! 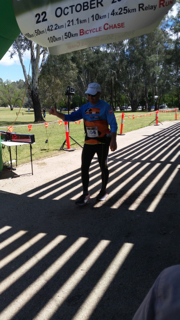 Apparently the delay was due to a close encounter with a kangaroo crossing the street straight in front of them and after that scare they had to battle a puncture at the 75km turn around….Francois used the opportunity to sample everything available at that food station, whilst his driver was fixing the puncture.

After I was caught I still had to get to finish (no ride was offered) and it took me a good 15 minutes for those last km to reach the finish, where Francois was waiting to put me behind bars!

I was exhausted but very happy to have run 100km in just a bit over 12 hours, almost 2 ½ hours improvement from my previous best time. The overall winner (female) finished in an incredible 8:15 min and in the first 8 position where 5 female runners.

You can find a complete race report from the organisers here.

I am not sure when or if I will return but I certainly recommend this event. Great local hospitality, plenty-full choice of food at checkpoints, interesting concept being chasing by bicycles and a nice and flat course for running a new personal best. The offer 10km, ½ and full marathon, 50km and 100km events.

And for Francois cycling a 100km was the perfect final preparation for his epic New York Marathon early November. Both of us where also happy to have many friends who supported us so generously with our additional challenge to raise money for The Fred Hollows Foundation and Achilles Running Club – both organisation helping vision impaired people in Australia and world-wide. It is this support which keeps us both going, so a big THANK YOU from both of us!

Thank you for coming to our Team Run 4 Vision fundraising night for The Fred Hollows Foundation last Friday.

We had more than 100 die-hard trivia fans join the fun and tackle some tricky trivia – congrats to all the winners!

We’re pleased to announce that, together with the sale of raffle tickets and the silent auction, we raised enough money to restore sight and change the lives of almost 150 needlessly blind people. Thank you all for raising over $3600 and help The Foundation continue their sight restoring work.

We’re now looking forward to Friday’s Coastrek starting at 6pm in Balmoral, and we hope to see some of you cheering us on along the way when we pass the pubs and clubs in The Rocks and King’s X on our way to Coogee Beach.

Thanks again for your support. It’s much appreciated.