After a long 2-day, 1,200km drive from Adelaide my support crew Uli and Mary and myself arrived at the Birdsville Hotel on the afternoon of 25 June 2015, ready for the race briefing and final preparations.

The 2 nights before the race I spent in some comfort sleeping on the floor of the local gym hall, with most of us runners well knowing what is awaiting us in the next 5 cold desert nights.

The first three stages of the Big Red Run were all a full marathon distance, and our first stage started at 7:30am outside the famous Birdsville Hotel.

With lots of excitement in the air the runners were glad to finally be sent off into the desert onto our first 42.2km stage, running due West towards the Big Red, one of the longest fix sand dune in the world.

My plan was to approach this first stage slowly and see how gear, body and mind were holding up, but in all the excitement, the freezing morning temperature and the sun in my back, I started to

run to keep warm and soon I was cruising along finding myself just following the leading group.

I decided last minute not to run with a watch and solely rely on my body telling me how to go.

After an hour or so, I lost eye contact with the leaders (having someone in front makes navigation much easier), so now I found myself suddenly alone in the desert looking for those small little purple flags in the sand.

I arrived  at the first checkpoint far earlier than planned and was not at all surprised that Uli and Mary where not there yet. What surprised me was the fact that I found myself running a few minutes behind the leaders, a very unusual position to be in. But feeling far to good I just kept going West, up and down those sand dunes and soon I saw the Big Red ahead of me.

I still had to climb that monster and ran along the top of it for the final 4 km, towards the first camp but even with legs getting heavier, I fought on and finished 6th (5:02), a mere 20 seconds behind the fourth place! I felt sensational and was stocked to be part of a group of very elite runners.

In the back of my mind I already knew that eventually I will have to pay the price for pushing hard the first day, but hell, it was worth it and fun! To make the day even more memorable my two tent buddies (David and Gerard) and I took up the offer to take up a 7-minute helicopter flight over the desert. Only from the air we truly became aware of the enormous vastness of the desert, the huge dunes and endless distances we will have to run in the coming days – a daunting prospect indeed.

Stage 2 start was at an almost human time of 8:30am, so we had time to warm up in the sun prior heading off, this time due North for a good 20km before turning around back towards the camp along mostly dusty desert tracks and huge dunes, but what was new and painful to run on, with endless gibber plains in between.

Kilometers after kilometers of rocks, rocks, rocks and more rocks – perfect for a 5 minute foot massage, but deadly for running for hours on them! And the second pain in the but were the millions of bush flies! When the white settlers arrived with their cattle, little did they know what will follow. Fies everywhere – up your nose, in your ears, on your face, arms and back…..it was sometimes impossible to run without wearing a fly net.

Still feeling fresh on the second day, so off I went hard following the footsteps of the leaders, and I went with a few stops to take photos. I managed to stay in contact with the leaders and crossed the finish line in 11th position (4:56). At that stage it became already clear who will be winning this race. Kay Bretz finished the second marathon in an incredible 3:27 and would make sure in the next couple of days that he will be crowned as the new king of the desert back in Birdsville.

Stage 3 was a though one. It was much warmer already in the morning, and the race plan was to head further West over more bloody dunes after dunes, then turning North for 10 km and back South towards a new camp. The humidity was tricky today and the crossing of gibber plains and salt lakes added to the difficulty. The last few – which seemed to be endless – kilometers towards the camp, were glimmering at the horizon like a mirage. It was brutal and we were running past a pile of cattle bones which made it almost surreal as an experience. at that point, I paid that price of having had two strong runs the previous days, and the third marathon ended in 5:53 and position 17. The only consolation was that everyone suffered too. A big desert thunderstorm with lightning and rain storm just after dinner made everyone quickly hobbling towards their tents for an early night.

Day 4 was a ‘recovery’ day with a shorter 30km run, again staring to go West, crossing a muddy salt lake and a good dozens or so sand dunes before heading North and then back East along the Simpson Desert Track towards the Big Red and South to our camp, basically a 30km loop in the desert.

The track sections we were running on were mentally challenging as they simply went on and on in a straight line, disappearing at the horizon in both directions.

This was the first day since Birdsville that we runners encountered people other than our group in the desert. Four wheel drivers (4WD) crossing the desert were out in big numbers heading West towards Coober Pedy.

Whilst running on one of those gibber plains, I came across quite a 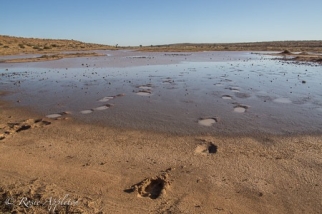 few wet areas and to my surprise, I found small fish and frogs meddling around in the water. And that in the middle of the desert!

As we were heading towards the same camp as before, I was mentally ready for the long stretch of gibber and sand towards the camp and I finished a strong 14th in 3:47.

And so it crept up on us. The big day 5. With 84km ahead of us many newbies were very apprehensive and nervous about the day ahead. The medic tent was very busy early morning looking after many sore and blistered feet. 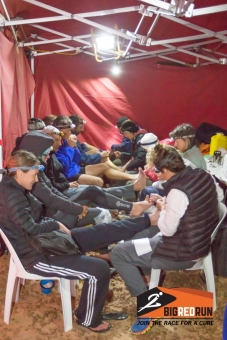 I felt good and knew that this was the day where I could make some time good if running smartly. The 6am start was not my favourite time of the day, still freezing cold and it was dark, but at the same time it allowed me to take on the first couple of hours slower than I would have done in daylight. So I could build up momentum the longer the day went on. We headed first towards the border with SA ,and then North for a few hours towards check point 4, before turning all the way back South for another stint along the border fence to South Australia, before heading North again towards Camp 5, only 8 kilometers from of Birdsville.

This day was all about drinking and eating regularly, making sure the ‘engine’ was always full and well ‘lubricated’. We had the option to keep a drop-bag with food at check point 6 (62km) and it was towards that CP when I slowly started to make up time.

By the time I arrived at CP6 ,I found myself in a group of 6 other runners (who were all ahead of me earlier) and I saw the opportunity to make a move by simply taking my food pack and heading straight out again. This was about 8 hours into the race and all other runners started sitting down and having a recovery stop. Soon I had put a few kilometers between them and myself and only one runner eventually managed to catch up with me again, with about 10-12km to go. He overtook me straight away and kept going but I kept in visual contact and on a very long, seemingly endless salt lake I caught up with him again. Without my watch I had completely lost track of time, and I wondered aloud if we would make it back to camp in daylight?

The answer surprised me

when he told me that it was is only 4pm, and that we were only 10km from the finish. This was enough for me to put in another gear, and soon I found myself alone again, running strong towards the finish. The race organiser made a point of putting the finish line always at the end of a flat plain or hiding behind a sand dune, making it very hard for us runners to be able to judge the distance to the finish and more often then not an early sprint towards the line was cut short by tired legs realising that there are still a few more km to go.

I was overjoyed to finally see the camp in the distance, and when I crossed the line in 11 hours at 14th position, I knew I had a good day. Day 5 proved to be a very long day and night for some, with the last trekker finally crawling into her sleeping bag 20 long hours after the start.

The last day was a day of celebration with a mere 8 km sprint back to the Birdsville Hotel for a cold beer. We started only at 10:30am, which allowed some of the late comers from last night to see the camp the first time in daylight.

As we did not have to carry any water or gear most runners decided to leave their running bag with the rest of their gear and enjoyed a relaxing jog back to Birdsville. Even though it was not counted towards the overall total, I decided to run to the finish and after 5 days and 250km I crossed the line 11th overall.

Kay finished the race in a new record, covering the distance in just over 21 hours, a record to will stand for many years to come. The organiser was also pleased to announce that over a quarter of a million dollars has been raised to help finding a cure to fight Type 1 diabetes.

That first beer right after crossing the line was one of the best beers I had in a very long time. The other great thing about the finish in Birdsville was he endless hot water. Birdsville taps into the Great Artesian Basin, one of the world’s greatest water reservoirs and enjoys year-around hot water straight from the basin at 98 degrees. What a pleasure it was to have a shower after 6 days in the same t-shirt and shorts. The celebration dinner plus quite a few more beers went down very well, long into the cloudless and cold night.

This was my second multi-stage race it was 7 years after the Marathon des Sables over the same distance. I’m very pleased that my training has paid off, as I finished the Big Red Run 7 hours faster; 7th male; and 1st in the old farts category (50+); and certainly less exhausted than I was in Morocco in 2008.

Next stop Egypt (fingers crossed) for the Ocean Floor Race – the 260km Non-Stop crossing of the famous White Desert in Western Egypt….