Two weeks ago, and after seven weeks of winter training in the gym and some longer runs out along the coast, I travelled South to Wingaloo Forest. The inaugural Southern Highland Challenge 50km Ultra was waiting. After a miserable week of rain and cold wind, Sunday morning’s clear sky offered a nice change and the cold early hours did not diminish the excitement of about 100 ultra runners at the start. Two rounds of hilly, single-track and fire trails awaited us. Keeping a slow pace to start with, I ran along side Phil for the first 5 kilometres, but soon he fell back a bit. I ran with a small backpack and 500 ml water in the bladder looking forward to refill at km 15, however ,15 came and went, 16 was passed, 17 long behind me and still no checkpoint!

By now I was out of water and desperately looking forward to the water station at km19, but still was a bit worried for runners who may have even less water on them then I had. Finally at km 19.5 a water station! The last 5 km were mostly in the open and the sun had come out in the meantime. I did the first round in 2hours 45min, and after a quick refill of my water bladder and taking on some gel and food, I went off on my second round. The field by now was stretched and soon I found myself on my own. This time I stopped at km 33 to take on some fluid in anticipation of no station at km 40.

The run was through beautiful bush and thick forest and with the small rivers running along the trek and the birds singing it was a relaxing run for a while – until the hills and distance took its toll and it became slow for me. To the surprise of all, th

ere suddenly was a drink stop at km 40 – apparently they were sent to the wrong spot (or maybe they could not find the right one). It was good to have some snacks and Coke to keep me going for the last long 10 km uphill and towards the open fire trails and the finish.

At this stage I was mostly walking up and slowly jogging the rest. Achilles Sydney were volunteering at the event, and to my delight some of the guys came running towards me and paced me home for the last 3 km – a great feeling to run strong to the finish – and after a long 6hrs 23min I finally crossed the line. 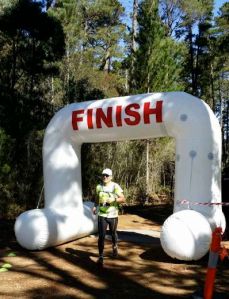 To my surprise Phil was already there – he had to pull out after one round having hurt his knee at km 17. I had a quick drink and after thanking the guys from Achilles we went back to our little cabin in Bundanoon where a nice, hot spa bath was waiting for my sore legs, and we had a good bottle of red to celebrate over a steak and mash.

March 2015 is the ultimate goal – in the meantime I look out for more longer race. 60km in Carcoar (outback NSW) is the next one in November.